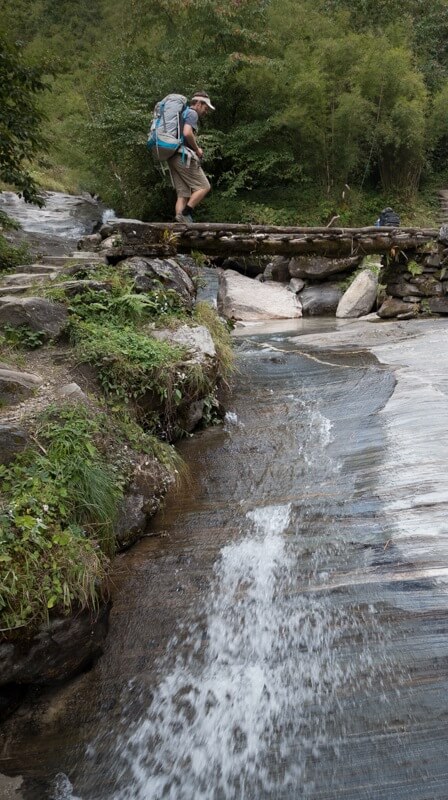 I’m sitting in the Moondance Restaurant Lakeside, Pokhara, getting ready to hit the trail but watching the weather on BBC world news.   Cyclone Hudhub made landfall on India’s east coast and is expected to hit here within 36 hours.   I decide to cool my heels until it passes.  The Himalaya are accustomed to torrential monsoon downpours, but when precip arrives this late in the year, rain means major snow fall in the mountains.  No sense in trekking or filming in those conditions…waiting is a no brainer.

Three days later, I’m on the trail, ascending through thick, lush rhododendron forests that blanket the lower elevations of the Annapurna mountain range.  My destination – Annapurna Base Camp – is about 3 long days of hiking ahead of me.  Unfortunately, I’m not feeling that great…I think I may be coming down with something nasty.  Slightly feverish last night, I’ve started to develop the symptoms of the Nepalese crud and I just feel crappy. Regardless, I’m hoping for the best and just keep putting one foot in front of the other up, up, up the trail.

As I hike, I realize I’ve been hearing the familiar sound of rotors in the sky most of the morning.  While it’s certainly not unusual to hear helicopters in the mountains here as they transport expeditions in and out or evacuate the injured typically due to Acute Mountain Sickness, my radar is up…the rotors have been pretty steady…something’s definitely wrong. 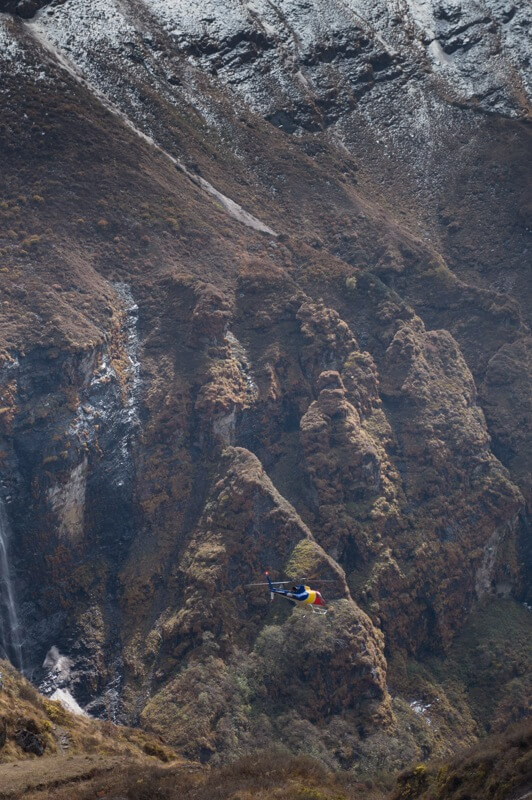 I finally gain the ridge line around mid-day and get a visual.  There’s a constant stream of helicopters heading towards the eastern flanks of the range; I can make out both military and private birds – and there are a lot of them…which means something very serious and very big has happened.  With no further information or alternative, I simply continue along to my next overnight stop several hours further up the trail.

Unbeknownst to me, the deadliest trekking disaster in Nepalese history was unfolding less than 10 miles from me as the crow flies – along the snow-filled Thorong La pass, the highest point on the famous Annapurna Circuit trekking route.  Ironically, I’m still hiking in shorts and a t-shirt, as it will be another 24 hours before I reach the snow line.  When the weather fully cleared over the Annapurnas 24 hours later, rescuers reached the scene and the world fully grasped the magnitude of the tragedy.  Extreme blizzard conditions from Cyclone Hudhub (the same storm I had let pass in Pokhara) wreaked havoc on trekkers and porters on the Annapurna Circuit trek.  At last report, 40 were killed and hundreds needed rescuing, suffering severe trauma and frost bite.  On the heels of the Everest icefall tragedy this same spring, when a huge serac broke off and killed 16 sherpas in its path – this has been a devastating year for Nepalese adventure tourism.  The kind of year that could change everything…or nothing. 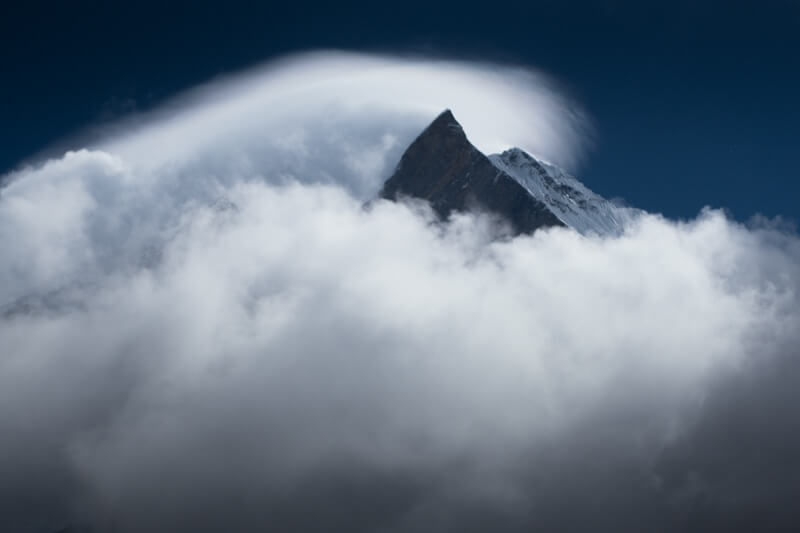 This storm packed a punch that inexperienced and ill-equipped trekkers obviously did not anticipate – until it was too late.  It’s hard for most people to imagine how quickly conditions can deteriorate up there – weather moves in quickly…drifting snow and white-out conditions easily disorient you…snow rapidly accumulates into an unstable slab above the trail.  Deadly avalanche conditions develop in a matter of hours and before you know it, you’re in a life or death situation with no way out.

Today’s wired and connected media have the story in every news feed within hours.  It’s a tragedy of dramatic proportions. International media hounds and trekker’s families are baying for blood and accountability.  It feels like a wake up call for Nepal…or is it?

In my experience, Nepal is a country with relatively few regulatory restrictions or safety guidelines around adventure travel.  Hundreds of international climbers, porters, and Sherpas have died throughout the the history of Himalayan mountaineering and it’s been a seemingly acceptable part of the industry.  Climbers and support staff accept the risk they undertake in the pursuit of reward or glory… and for many the freedom to operate in a non-litigious society is a major attraction – including myself, back in the day. 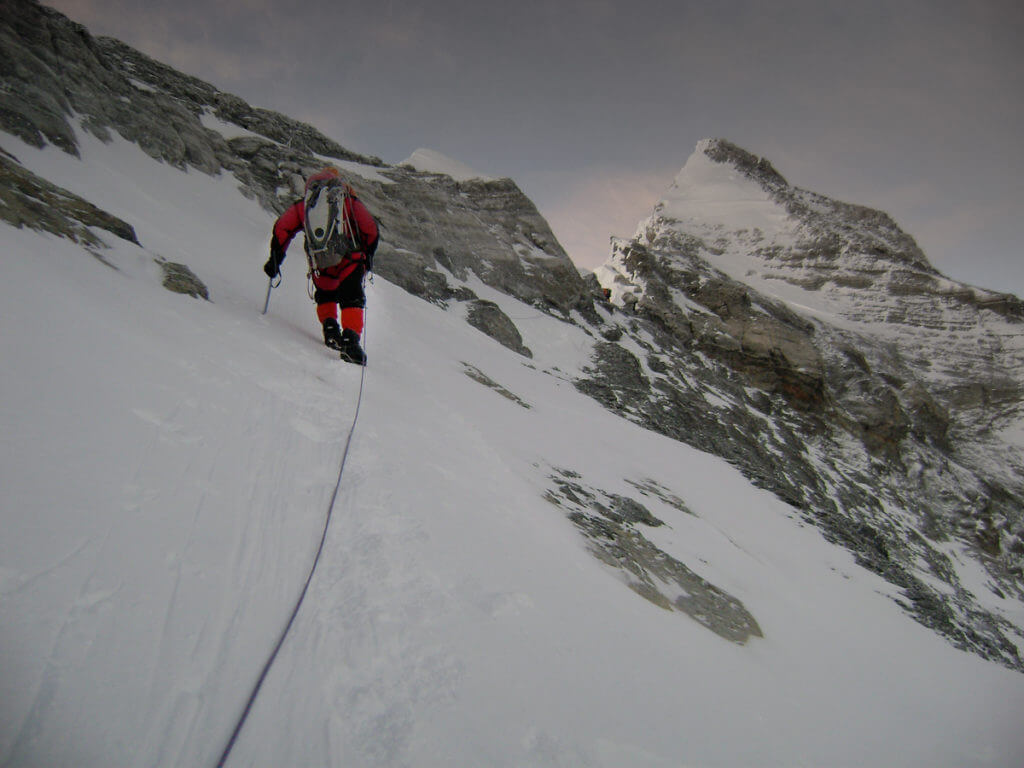 However, given that most trekkers in Nepal are inexperienced mountaineers enjoying a holiday adventure, it’s totally understandable that people expect the Ministry of Tourism to proactively oversee their safety.   After all, the Ministry issues trekking permits and collects significant revenue from these travelers for the privilege of enjoying the region’s trails.  Given modern communications, it seems inconceivable that there isn’t a system in place to alert trekkers about impending severe weather.

As the devastating news begins trickling in, I can’t help thinking that local Nepali tour operators need to assume a piece of the accountability.  Tour operators pay their guides an average of only $10 a day and professional training is virtually non-existent in the Annapurna region.   Communication between guides and their employers is reliant on cell phones despite guiding in an area with severely limited connectivity.  It is widely reported that many guides and lodge owners pushed trekkers onward – further into the eye of the storm – rather than exercising caution.  Poor information about the severity of the impending storm and a desire to “stay on schedule” sadly contributed to the magnitude of the tragedy.

If this accident happened in the Western world, I have no doubt dozens of liability lawsuits would already be filed and accusations of negligence and/or manslaughter would be brandished at tour operators and the Ministry of Tourism…but this is Nepal, and any cries for accountability may easily be lost in a sea indifference.  Although I personally think it would be a tragic mistake if Nepal’s adventure travel industry assumed the same litigious proportions as those of the west (given the country’s failed to even draft a constitution, I think a court system capable of facilitating consumer protection is unlikely anytime soon), it does beg the question of how – and whether – Nepal’s tourism industry will improve safety standards.  After 32 years of working here, I have to say I’m curious to see what lasting impact this tragic year will have on Nepal’s tourism policies.

My bet?  Money talks.  Since tourism revenue represents Nepal’s 2nd largest source of external revenue, the economics of tourism safety may prove to be a more powerful motivator than shame, politics or litigation.   In today’s connected world, consumer opinion travels fast and service providers are more vulnerable than ever to consumer critique.   It’s easy today for prospective clients to research how well-equipped or professional a particular tour operator is – and let’s face it, it doesn’t take much for a company to invest in a satellite phone for communication.   Going forward, I’m betting consumers will be much more selective about who they trust their lives with out there.

This unfortunate year notwithstanding, I do believe that a safer adventure travel industry has been developing in Nepal.  An international group of professional climbers, kayakers, raft guides, paragliders and equipment manufacturers have been investing time and support in training Nepali guides. A wonderful by-product of this training is the emergence of home-grown Nepali expedition-leaders and explorers.  Born into the world’s greatest playground, the country is now producing its own generation of world-class local guides.

And truthfully, despite the sobering tragedy that’s unfolded, I’m still happy to be back in the Annapurnas.  This particular trek is the first one I did upon arriving in 1983 from Scotland, and it’s fascinating to observe the changes since then along the route.   Following my route along the Modi Kola river to Annapurna Base Camp (ABC) I’m impressed by the transformation from what was once a series of rustic tea houses, to a series of relatively comfortable and attractive lodges. 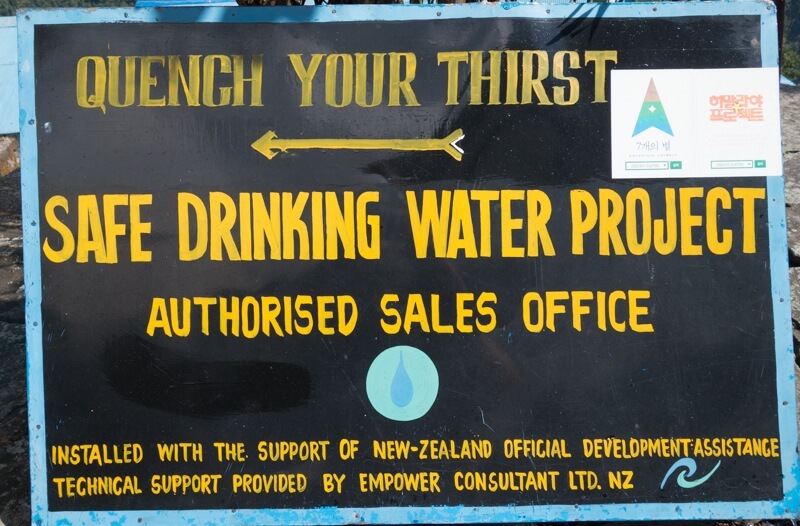 The entire area exudes a general sense of cleanliness and development that is a far cry from 30 years ago; trekking this route back then meant dealing with sewage issues in villages, garbage on the trails and almost certainly a case of stomach illness.  Not today.  It would seem ACAP (Annapurna Conservation Area Project), along with local community organizations, have been successful in creating an infrastructure and experience worthy of matching the magnificent scenery.

At the end of the day, trekking in Nepal under clear blue skies surrounded by 8,000 meter peaks is an undeniably magical experience, and ultimately, this is what will keep travelers coming year after year.

“For my part. I travel not to go anywhere, but to go. I travel for travel’s sake.  The great affair is to move; to feel the needs and hitches of our life a little more nearly, to get down off this feather-bed of civilization, and to find the globe granite underfoot and strewn with cutting flints”  Robert Louis Stevenson (1879) 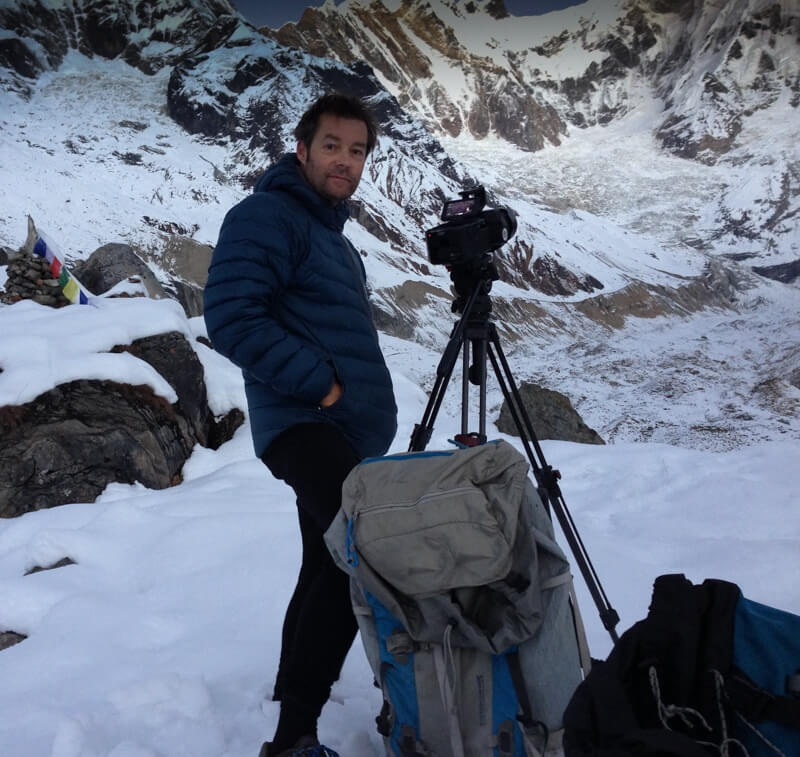