EXPEDITION DAY 47: ON FAITH AND CAMELS 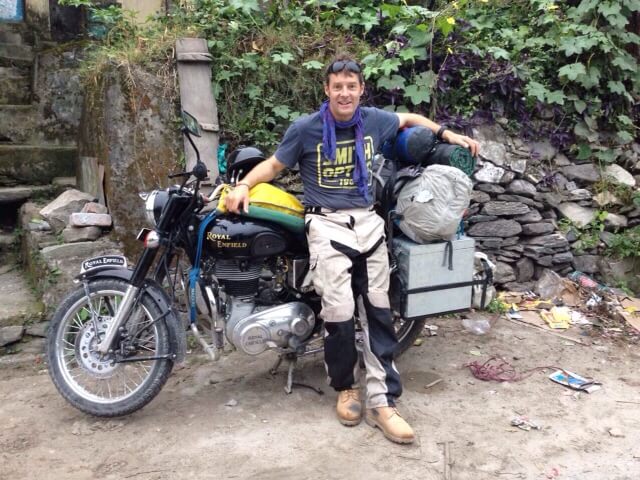 The Bedouin have a great saying about faith and personal responsibility: “Trust in God…but don’t forget to tie up your camel!”  I think that about sums up my modus operandi when going on an expedition of any kind. Success usually means striking a balance between thorough preparation, spur-of-the-moment problem-solving, and a certain belief that things are going to work out…because they usually do.   Which would be great, but in my experience, the other axiom is also equally true…the shit always hits the fan at some point.

On the preparation side of things, I’ve just reunited with the indomitable Mr. Manali in Rishikesh… he of the marvelous mechanical powers, who somehow managed to safely deliver my bike on time all the way from Delhi to Leh in the midst of a national state of emergency in Kashmir, landslides, closed highways, and Army evacuations. Frankly, I still don’t know how the hell he did it – but considering our mutual language challenges, I’ve decided it’s better for both of us to just leave his story to the imagination.

Disheveled, but totally unfazed following a hellacious overnight bus trip from Delhi, Manali appears one morning at my Rishikesh hotel. Within an hour of arriving, he’s got the bike in a local workshop, hoisted up and disassembled in various pieces. He takes great pleasure in pointing out my mechanical ineptitude, but beneath his jovial jabs, he’s a good teacher and does his best to patiently explain the mechanics of each component. We replace the clutch, brakes, a cracked front wheel bracket and headset. He then sets to work on tuning the engine and gearbox. Within two days, Manali’s overhauled the entire bike and we exchange the quintessential Indian head wobble with each other… translation: “it is done”.  Honestly, just knowing Manali’s out there somewhere is priceless to me.  We say our goodbyes – I’m not sure exactly when I’ll see him again…but given he ties up the proverbial camel for a living, I’m sure our paths will cross again soon. 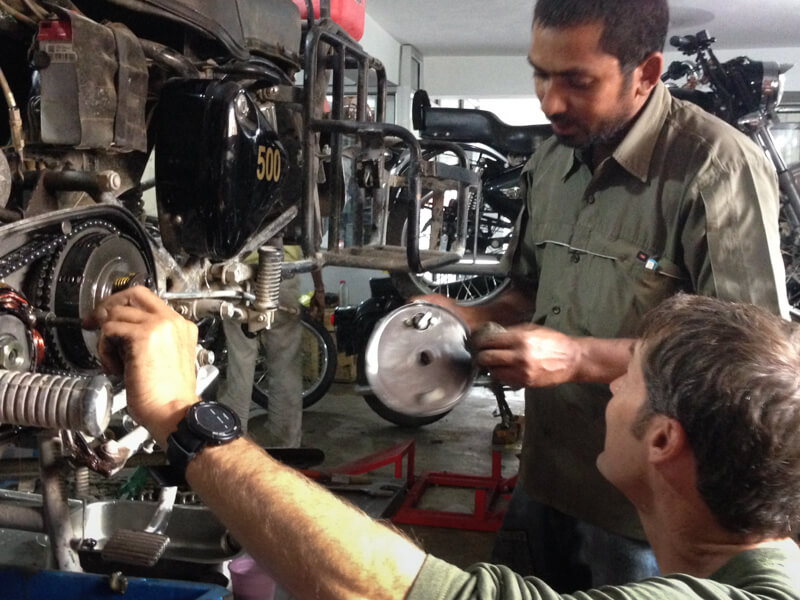 Tonight we are filming an Aarti ceremony at the Parmarth Niketan’s ghat on the Ganga. Parmarth is the largest Ashram in Rishikesh and is led by an internationally-known Swami with a robust following.   Their Aarti – the nightly ceremony of divine light on the Ganga performed at several docks or “ghats” in Rishikesh – promises to be particularly elaborate this evening given the Swami himself will be in attendance, having just returned from a United Nations conference on climate change. We’ve waited an extra two days here just to capture this event, hoping it will provide a rich segment for the film. It doesn’t disappoint. 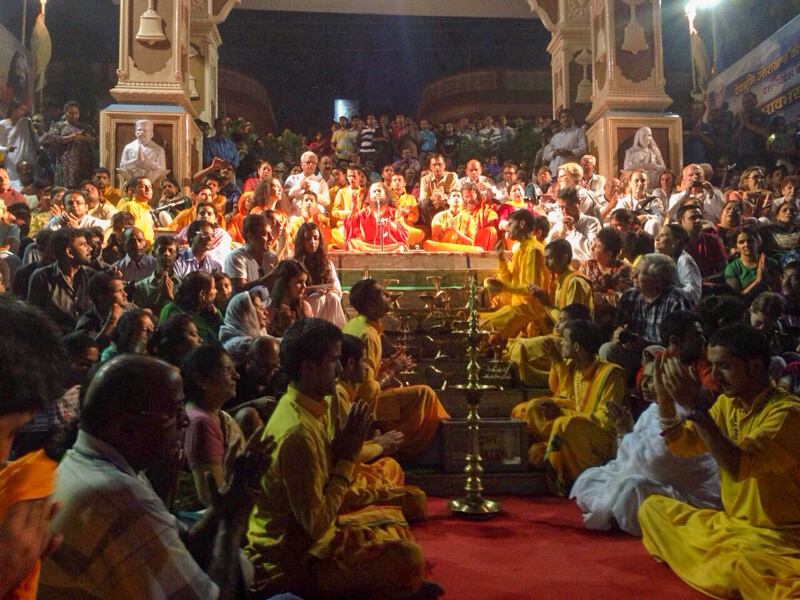 The blood red sun dipping below the horizon signals the beginning of the Aarti. Today also marks the start of a major Hindu festival and activity is elevated everywhere in town.   The crowd swells and surges around the ghat… a hypnotic mantra reverberates from the elevated center stage where the Swami, surrounded by his trusted disciples, presides over the ceremony in kingly fashion. As darkness falls, ornate burning lamps pass through the crowd illuminating the mesmerized faces of a packed house. Floating candles are released onto the river. People are chanting in unison. Everything is a pressing crush of gold, orange, crimson, smoke, and noise. It’s very hot, very crowded, and very theatrical. Despite this, the energy feels both jovial and sincere. It’s a spectacular way to wrap up a very interesting 10 days in Rishikesh. 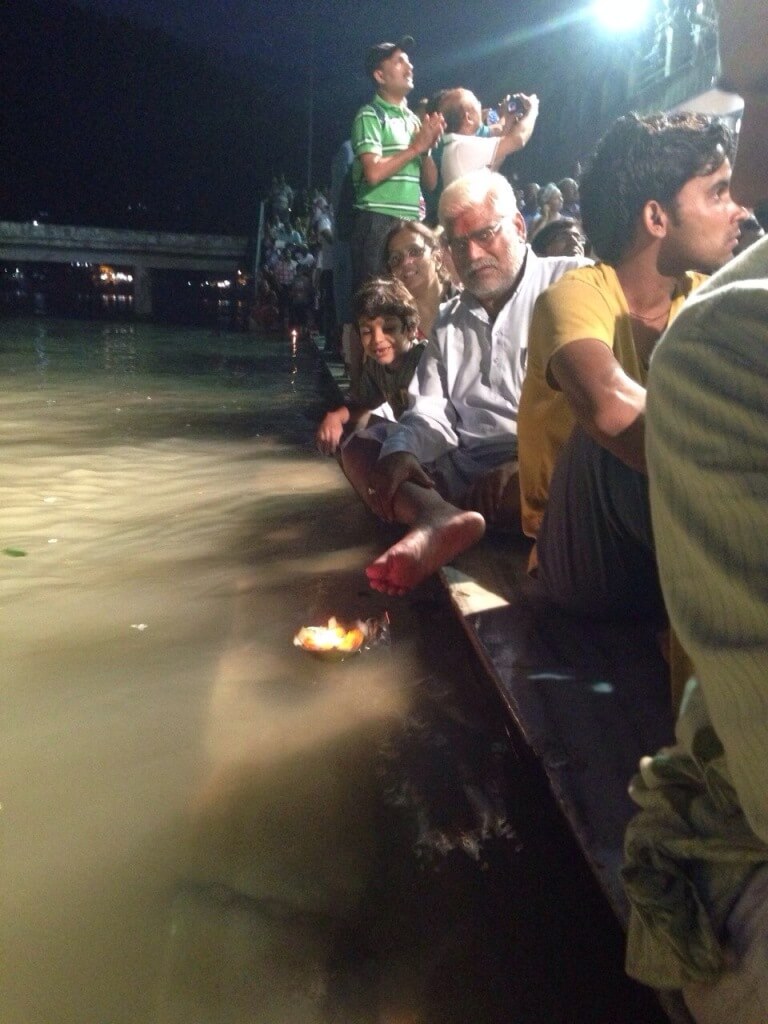 We came here thinking we would tell one story…but found a different one unfolding. We followed that breadcrumb trail to a more nuanced understanding of Rishikesh and her future.  This really is the definition of an old fashioned adventure – you can plan it, but you can’t predict what’s really going to happen.

I think about the hundreds of thousands (soon to be millions) of visitors coming to participate in adventure here. The packaged experiences – the shepherding of tourists through the rivers, the forests, the trails, the ziplines.   After 32 years of actively growing the Himalayan adventure travel industry, I understand better than most people the conflict inherent in the work…the joy delivered to people as well as the price extracted from the environment. Part of my personal reflection these days involves detaching from perpetuating a one-way transaction with Mother Nature.   My time in Rishikesh, watching the growing success of the tour operators here, underscores all of these issues. If nothing else, it’s helping me to personally crystallize what I think, what I want to do next, and what I care about. 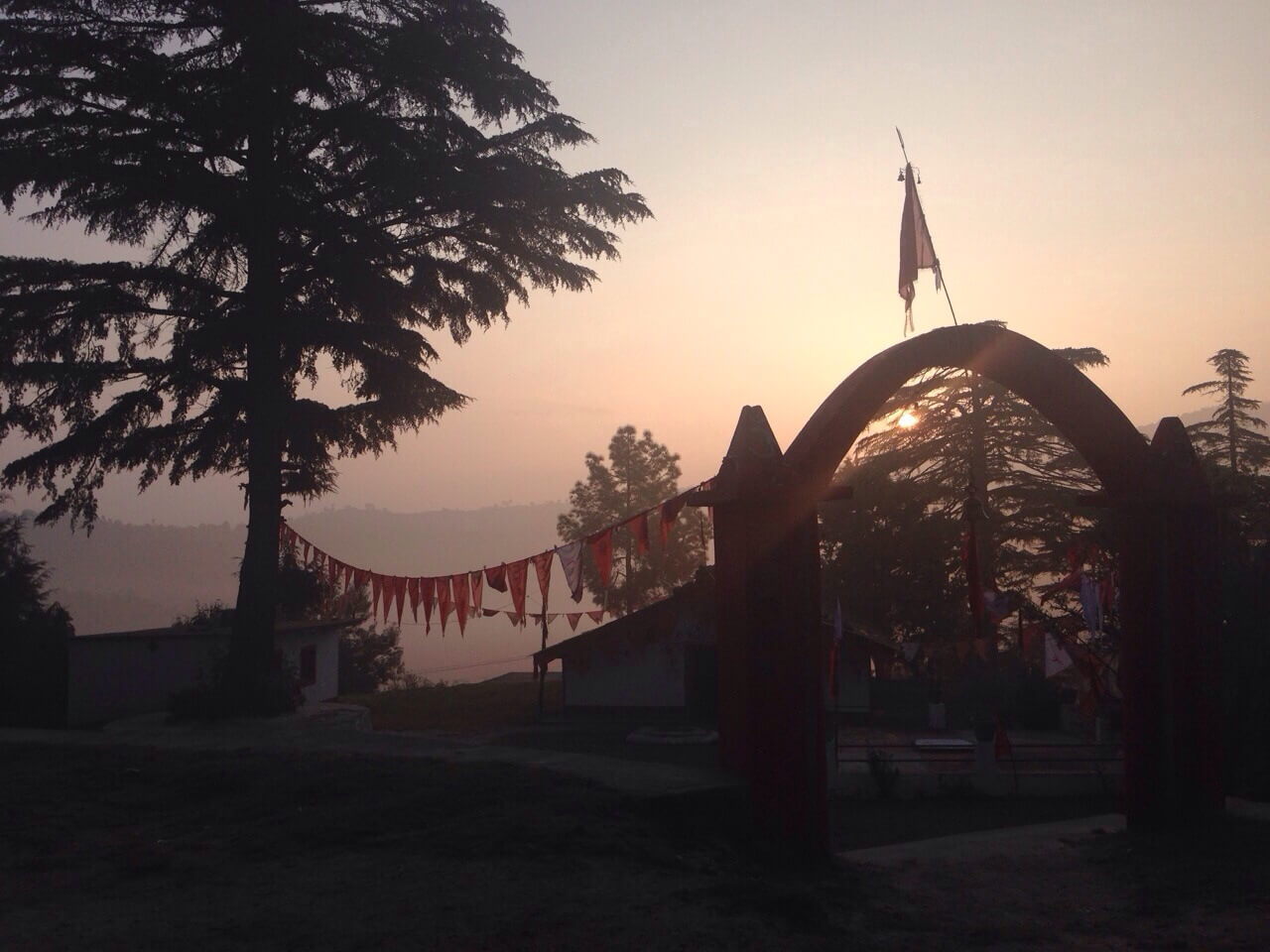 I’m more than ready to leave. It feels good to get back on the road after 10 days being in one place. Par and I say our goodbyes for a few weeks. I’m planning to film the next month solo in the mountains of Nepal. Par’s planning to trek in the Khumbu up to Gokyo Ri during the break before meeting in Kathmandu to finish filming. Pia’s coming out to direct a segment and finish the expedition with me. Although I’m looking forward to being on my own for awhile, I’m also really excited for Pia to get out here finally.

After several days on the road, Rishikesh and its myriad of complex issues are firmly in my rearview mirror. Intermittent glimpses of distant peaks grow more frequent and soon the beginnings of the Garwhal Himalayas begin to dominate the skyline. It’s a breath of fresh air (literally) to be back in the mountains. In keeping with the region’s remoteness, lodging becomes virtually non-existent in the rare villages I pass…and basic at best when available.  I spend evenings pouring over the map, carefully planning the next day’s route, assessing distances and calculating fuel requirements. 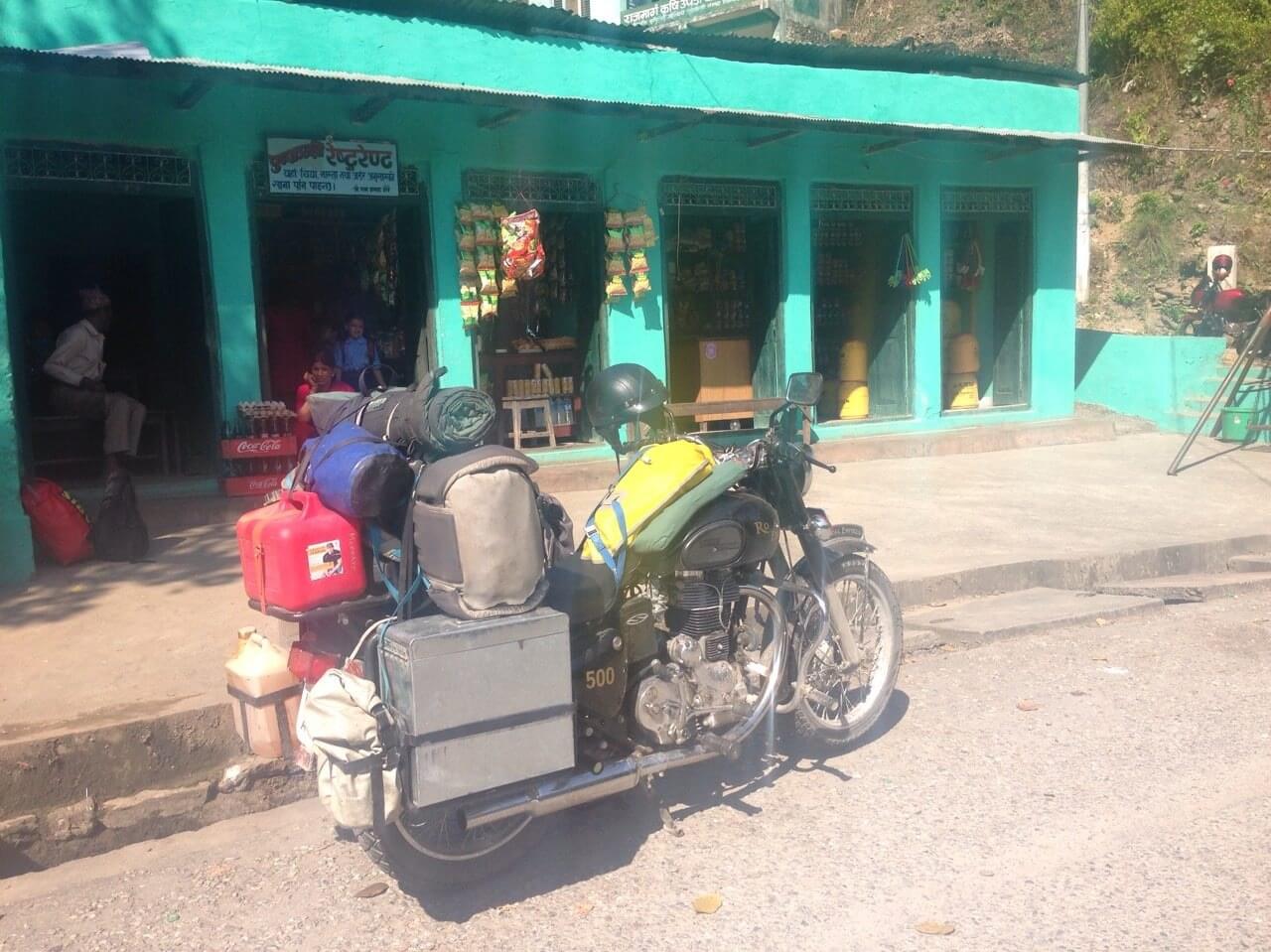 Manali would approve – checking my engine oil is now a morning ritual and a reminder that my solo safety is intrinsically linked to paying attention to little details. In choosing to travel on remote back roads, I’m mitigating the danger of chaotic Indian traffic, but I’m also at much higher risk should something go awry. But, in truth, as with everything in my life, there was really never any question as to which route I would choose. As I wind along through the quiet Himalayan foothills, my decision is rewarded with an authentic, uninterrupted view of rural life here.

My back finally turned to India, I can feel Nepal calling me…as she has every year for three decades. With the exception of river crossings and landslide debris from last year’s devastating floods, the road surface is now fabulous and I’m making terrific progress. The prospect of arriving in Nepal slightly ahead of schedule is a carrot I can’t resist and I push into some long days. The bike is running like a dream as I race toward familiar shores. 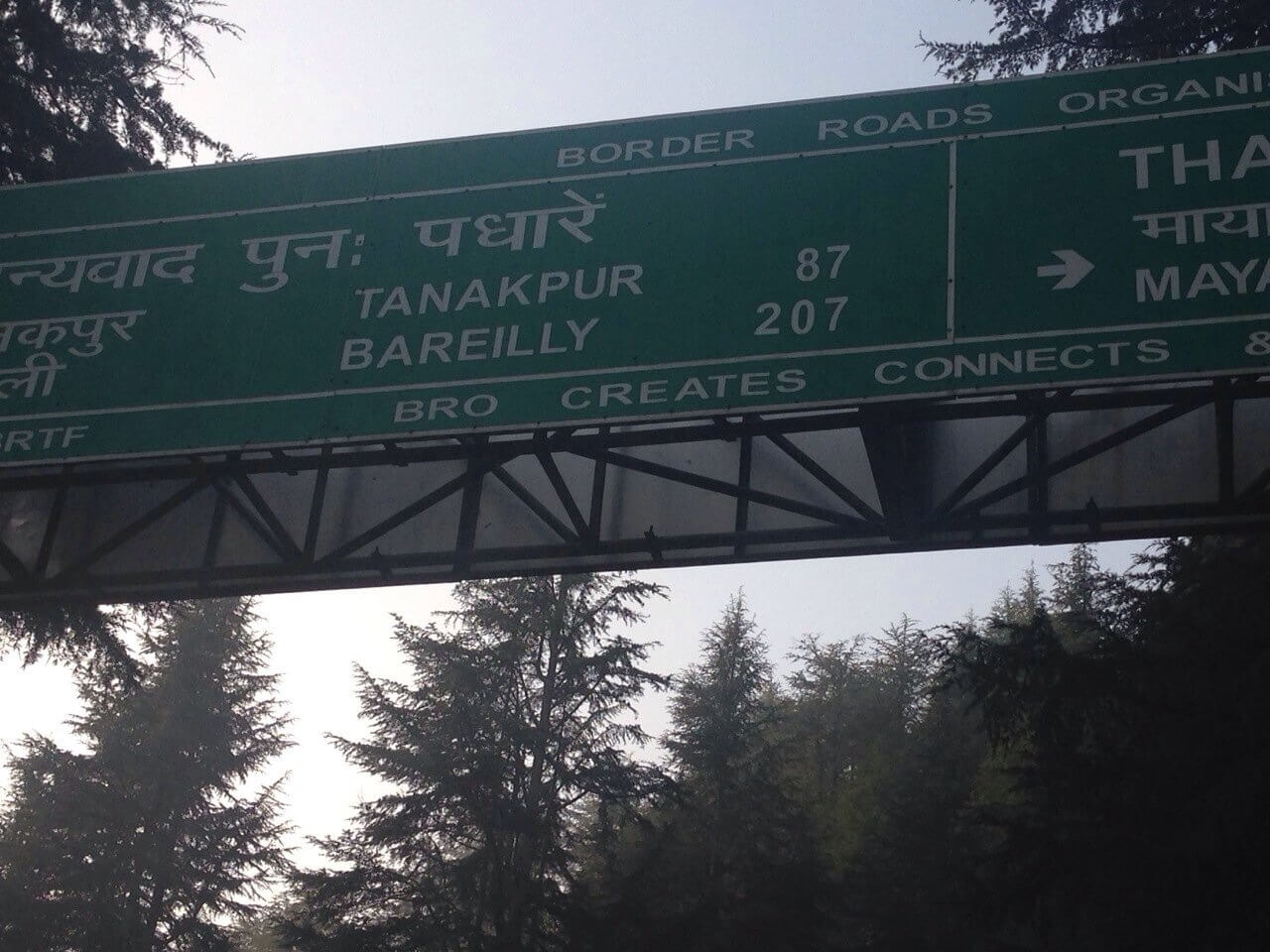 The only worry looming on the horizon is my India – Nepal border crossing. In my experience, border crossings in developing countries are unpleasant, risky places where anything can happen. Customs offices are typically corrupt and the border crossing process is designed to wear down the most hardy overlander. My bike’s paperwork still lists a Mr. Rahul Jain as owner since it’s not legally possible in India’s bureaucratic circus to transfer title to me as a non-national.   Though this is a situation common as rain, I know it’s a well-loved angle for dodgy customs officials to demand a little baksheesh for the privilege of crossing the border unscathed.

The travel gods smile on me though, and with absolute astonishment I find myself conversing with the most helpful Nepalese customs officer on the planet. Not only is this guy accommodating, he’s completely straight and expedites my paper work – sending me on my way with a genuine smile and a Namaste.

I’m now barreling down the Mahendra-Nagar Highway in the far west of Nepal – my wheels finally rolling on Nepalese soil.   It’s getting on to dusk now. To my right the light is beautifully diffused by the translucent paddy fields of the Teri. To my left the foothills erupt skyward, signaling the beginnings of the greatest mountain range in the world. India – and the most physically risky phase of the expedition – is now behind me.   With luck, I’ll roll into Pokhara in only 3 days. I grip the handlebars and accelerate down the quiet highway, marveling at the universe and all she delivers. 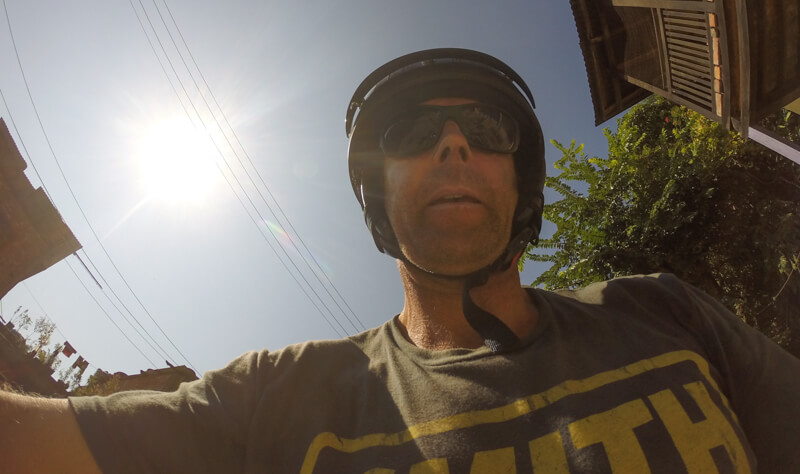